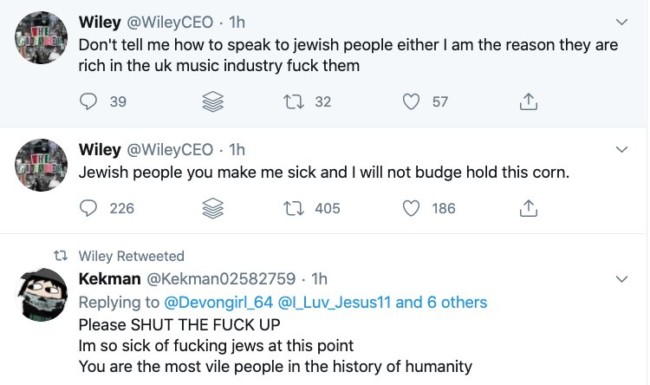 I’m not familiar with this Wiley person, he’s apparently a Grime artist. I’ve just listened to 10 seconds of what is apparently his most popular track and it was a pile of wank.

But I have just been reading about his social media racism and the piss poor response by Twitter’s censors who are apparently ok with a black supremacist anti-Semite calling for genocide against the Jews.

This Wiley character believes that black people are the original Jews and that the current people who call themselves Jews are usurpers denying black people their birth right. He has called for Jews to be shot and for black people to go to war with them.

This is a criminal offence but Twitter have allowed him to stay on their platform as long as he deletes the offensive tweets. Utterly unbelievable but so predictably unsurprising as a black Labour-supporting celebrity.

He has been reported to the police by the Campaign Against Antisemitism who have also asked the Cabinet Office to withdraw his MBE. I won’t hold out any hope for justice.